The most authentic of our hats! Discover our selection of bowler hats in wool or felt and bring back to life the Charlie Chaplin in you!
Read more
Filter By
My selection:
Filter
Gender
Brand
Color
Season
Fabrics
Price 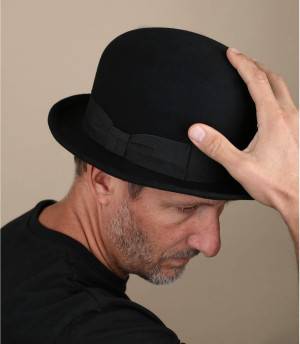 The bowler hat for men and women, an icon

Of all the hats that immediately evoke a famous character, real or imaginary, the bowler hat holds a special place. For some it will be Charlie Chaplin's hat, for others the Bowler Hat and Leather Boots series or even A Clockwork Orange. This hat, usually made of felt, is both extremely simple and very distinctive with its rounded shape that is recognizable at first glance.

The invention of the Bowler hat dates back to the 17th century and was originally created to replace the often too soft and fragile peasants’ hats. It finally established itself and from the 19th century onwards was seen as a symbol and hallmark of the English bourgeoisie. On stage, the bowler hat quickly became a key prop in comedy and cinema, as it easily enables the creation of ambiguous characters, both classy and quirky. One remembers in particular Laurel and Hardy, Hercule Poirot, Bowler Hat and Leather Boots or Stanley Kubrick's masterpiece A Clockwork Orange 1971.

The bowler hat for men and women: a success story

Today the bowler hat is reappearing, on the heads of fashionistas and fashion bloggers. The biggest brands such as Brixton have put it in the spotlight within their collections. Its success lies in its great sobriety, which makes it easy to wear, and its round side, which softens the silhouette. Even though it is still worn by socialites, the bowler hat is back today as a very feminine accessory and appears more and more in the ready-to-wear collections. On the "Dress code" side you can wear it with a blazer, a jumper or a cheeky mini skirt with coloured tights while keeping your hair flowing. Effect guaranteed!

On Headict, bowler hats are made of wool

On Headict, the shop specializing in bowler hats sales, we offer you quality products. For this reason, bowler hats available here are made of wool, a high-quality material.

The famous woollen bowler hat offers you many advantages. First of all, it can be worn in any season, since wool is thermoregulatory. In winter, the bowler hat protects you from the cold. In summer, the black bowler hat lets your skin breathe and wicks away perspiration very effectively. Besides, the bowler hat in black or white version is very comfortable to wear.

Note that it is also possible to find bowler hats in leather or felt! Place your order right now on Headict, and get a 48-hours delivery. Moreover, we offer our customer the best choice and the best prices.